After establishing Das Dharam on 16th February 1980 Mahraz Darshan Das Ji laid down the philosophy, rules, principles and practices of Das Dharam, which are as follows:

The principles and beliefs

The main part of Das Dharam’s belief system is Naam (Guru Mantra/Holy Word), which is given to a devotee by Mahraz Ji. Even though it is not a new or even a unique concept, Mahraz Ji has his own tradition of Naam Daan (initiation). This also means following a living Spiritual Master or Guru, as a Guru has to physically bestow Naam (Guru Mantra) upon his follower. Mahraz Ji’s giving of Naam is a secret between Him and the individual follower. This can never be spoken or written down. It just needs to be recited and remembered in one’s heart and mind.

The words used to remember the supreme being are also Naam (Name/Word), for example, God, Allah, Wahe Guru, Ishwar, etc. These are the generic names that anyone can adapt, recite and meditate, but the Naam given by a Guru is special, like a password to access divine abode.

Nanak as the Divine

Das Dharam has adopted the name of ‘Nanak’ as it is a generic name for ‘The Almighty’. Even though the first Sikh Guru, ‘Sri Guru Nanak Dev Ji’ is very much revered and respected by Mahraz Ji and the followers of Das Dharam, the name “Nanak” is not referenced to the physical person born in the year 1469. “Nanak” in Das Dharam is the name of The Almighty Divine, “Nanak” who created the person Sri Guru Nanak Dev Ji. 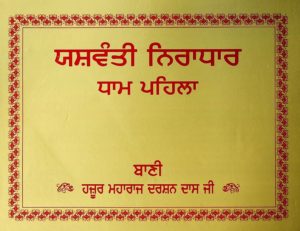 Das Dharam also has its own Scripture “Yashwanti Niradhar”, formulated by Mahraz Darshan Das Ji with the divine inspiration given to him by ‘Nanak’. It is a collection of about 300 Hymns written by Mahraz Ji in the tradition similar to the Sikh Scripture, but with no connection to Sikh Scripture. Hymns contained in “Yashwanti Niradhar” are not just praises of the divine, but also include references to the teachings of earlier Gurus and Prophets. Mahraz Ji’s own teachings are also included in “Yashwanti Niradhar” that begins with “Arjoi” (A humble request to Nanak). These hymns are sung as prayers by Hazuri Raagis (Mahraz Ji’s Hymn Singers) in the Dera, to the congregation, who listen to the Hymns or sometimes also take part. 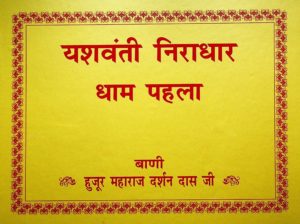 These principles are also not new or unique to Das Dharam but Mahraz Ji had laid them down as founding principles upon which the entire spiritual life of a follower can be structured.

In Das Dharam, traditional deities of India are not just respected, but celebrated. For example, Krishna Janmashtami being one of the biggest events held at Loni Dera. There are also celebrations for the birth of Sufi Saints by performing Qawalis (musical performance devoted to God), the birth of Sri Guru Nanak Dev Ji and Vaisakhi at the arrival of the harvest season in India. In UK and other western countries Christmas is also celebrated at Das Dharam centres by inviting and involving local Christian community.

Mahraz Ji always welcomed everyone and anyone who came to him and the congregation included Hindus, Sikhs, Muslims and Christians and other faiths. He informed his congregation that they did not need to change their Religion or faith, but instead focus on becoming better human beings through selfless service, love and compassion. If you were a Sikh you should become a better Sikh, if you were a Hindu you should become a better Hindu. If you are a Christian become a good Christian, if you are a Muslim be a good Muslim.

Mahraz Ji wanted his followers to help awaken humans from Religious dogma and any type of fanaticism which made individuals rigid and close minded. This would encourage a universal brotherhood (men and women) of all. Therefore, despite having all the pillars of an organised Religion, Das Dharam can be viewed as a path to strengthening individual human ties through shared values and ideals towards God and humanity.

Mahraz Darshan Das Ji also established a uniform for the followers of Das Dharam which is normally worn during prayers and events at Dera’s, especially by the volunteers serving the congregation, hymn singers and the priests. The dress code comprises of white traditional Punjabi Kurta like and Pajama dress with a white cotton belt fastened over the Kurta. A white turban or a white headscarf is worn as head covering and a Tilak (red mark on the forehead) is also worn. Ladies wear the same but the colour of their “uniform” is Khaki Beige. All of this uniform was designed especially for the Mission by Mahraz Ji, even the particular and unique way of wearing the turban which was not like any other.

Being humanitarian in nature and being charitable is also a major practice of Das Dharam. The scripture Yashwanti Niradhar also emphasises on this aspect of the faith

According to the teachings of Das Dharam there are three ways of being charitable: 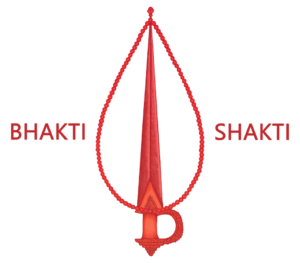 Another form of prayer Mahraz Darshan Das Ji gave to his followers is the recital of:

“Nanak Naam Chardi Kala, Tere Bhane Sarbat Da Bhala” – In the name of Nanak do something good for someone.

This recital is done daily from 2pm to 2:15pm for 15 minutes and it was emphasized by Mahraz Ji to ease day to day hardships and help you on your spiritual journey.

This recital is in addition to the recital of Naam (Guru Mantra) which is done without speaking and only internally. That is the main practice of Das Dharam and must be done as much as possible. Once a follower is given Naam by the Holy Master, he or she is considered to be reborn spiritually and ordained in Das Dharam.

Kirtan (hymn singing) is also an important prayer and followers either do or listen to the Kirtan. The ones who can’t, can attend the congregation at Dera’s on Sundays or special events to listen to the Kirtan by Hazuri Raagis (appointed Hymn singers).

Every Religion has some sort of prayer, usually a short one to be conducted either at the beginning or at the end of something. In Sikhism it’s called ‘Ardaas’ and in Hinduism its ‘Aarti’, in Christianity it’s like the Lord’s Prayer, etc. Das Dharam’s prayer is called ‘Arjoi’, which is a derivative of Persian word Arz (request). Every event, Kirtan or prayer is both begun and ended with Arjoi. 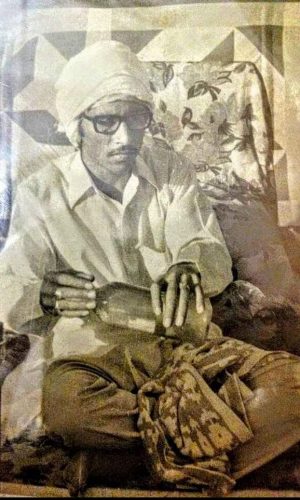 “Bhog” is another practice that the followers of Das Dharam follow. This is the offering of the pure vegetarian food made for the congregation, to Mahraz Ji’s Gaddi (shrine) reciting Arjoi. The food that’s offered to Mahraz Ji’s shrine is considered to be tasted and blessed by the Holy Master and it’s then mixed in with the rest of the food for the blessings to be distributed among the entire congregation present. Followers of Das Dharam follow a strict vegetarian dietary regime and no meats, eggs or alcohol are allowed, especially for those who have been given Naam by Mahraz Ji.

Das Dharam also has its own version of Holy water (Jal), which is considered to not just bring about Guru’s blessings but also to have healing properties. Mahraz Darshan Das had blessed water taps in various spiritual centres. He would often say that all the medicines of the world are in this Holy water and countless people have been and are still being cured to this present day.

Mahraz Ji’s message was simple and this attracted people from all walks of life and he encouraged people to follow the truth-that is God- within their own faith, and to recognise that truth in each person. He acknowledged that we are all divided along different lines but this may take us away from our one true path, meaning unity was going to become more and more important.

Mahraz Ji taught that the spiritual journey that every human being must undertake for a better understanding of self and of the One God must be undertaken under the guidance of a living Spiritual Master. Mahraz Ji has created within Das Dharam, an equal platform for all faiths to come under one umbrella and pray in the way one is accustomed to and to serve humanity on a practical level.